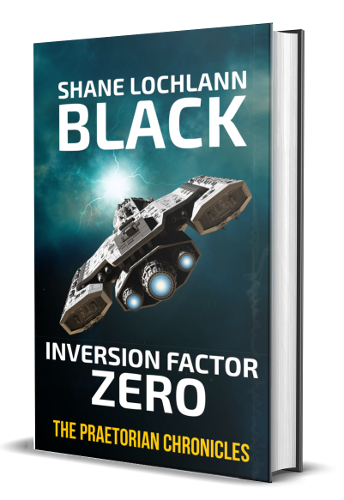 Only one man could harbor such evil. Only one captain will follow him into Hell.

Jayce Hunter’s officers know if their captain has one flaw, it is that she accepts responsibility for failure when she shouldn’t. When the Second Praetorian War threatens to explode into a cataclysm fit to consume every inhabited world in known space, its architect flees to a place nobody expected, and takes with him knowledge that could not only disrupt human history, but unravel every defense the Core Alliance has against the Sarn Empire.

The crew of the recon frigate Sai Kee is prepared to carry the war directly to their enemy’s doorstep, but when the first battle is set to burn the skies over a peaceful hamlet in 19th century England, their captain hesitates. Though their unusual visit to the Atlantis system left her brother Jason Hunter’s senior staff with exceptional new technology, Sai Kee’s captain still struggles to justify invading mankind’s past to save the future.

Meanwhile, a man who should not be alive is loose somewhere in time, carrying the deadliest of weapons and set upon a bizarre and perilous mission to uncover the secrets of an alien species that may have gone extinct over a billion years before Earth’s first spaceflight. Only Hunter and her unlikely band of last-minute heroes can prevent a future war from becoming an historical disaster.

Inversion Factor Zero is a free web series chronicling key events in Second Praetorian between the Core Alliance, the Kraken Decarchy and the Sarn Empire. It is a companion series to Destroy All Starships, which is the official sequel series to Starship Expeditionary Fleet and Starships at War. Visit this page for free chapters and special features.

Destroy All Starships is the companion series to Inversion Factor Zero!
Available now!