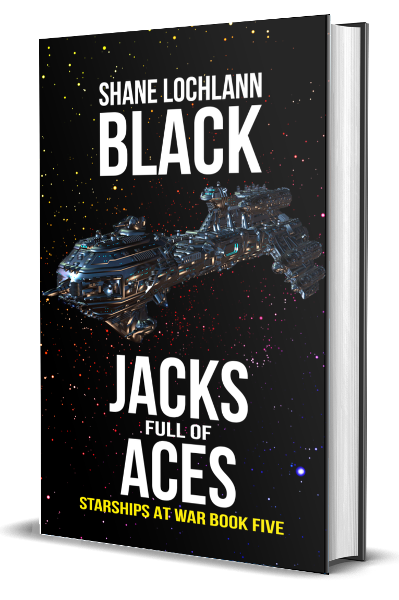 Defender Starship Argent is a Citadel-class strike battleship. She is the third ship of her class, following DSS Citadel and DSS Bushido. Argent was constructed at the War Memorial Star Yard under the authority of Core Two’s Skywatch Operations Base.

Hull BBV-740 displaces 5.07 million tons and is 2480 feet long and 1710 feet at the beam from flight bay to flight bay. She is 72 stories tall from her ventral armor plates to the top of the Skywatch tower. Her main hull is 543 feet tall from bay mounts to deck one. Her class B external flight bays are 18 stories tall and cover more than 21 acres each. Her class A internal flight bay is more than twice that size, covering more than fifty acres and rising 21 stories from the primary deck.

Argent is equipped with eight magnetically-activated rail-tunnel spacecraft launchers. The six along her flanks are capable of launching strike fighters including Wildcat and 2G Yellowjacket designs plus the new 3G Superjacks. The two on either side of her internal bay are much larger, designed to launch transports, corvettes and gunships. The interior volume of Argent’s primary hull and flight decks is sufficient to contain 32 Ford-class wet navy aircraft carriers.

A strike battleship’s crew is organized into six major commands, each with a senior officer reporting to the vessel’s executive officer. Her total complement at full load is approximately 4300 personnel.

The commanding officer of a strike battleship must hold the rank of captain, commodore or rear admiral, and must be both a line officer and a flight officer. The executive officer holds the rank of commander or captain. Although the XO is not strictly required to have flight status, they must at minimum be eligible for a line command.

All senior officers aboard report to the executive officer, who in turn reports to the captain. Executive officers are informally addressed as “Force Commander” (FORCECOM) aboard capital ships with star wings or marine brigades, as they are often tasked with deploying and managing away forces like strike fighters, surface formations and other spacecraft. Aboard “pure” capital platforms like battleships, heavy battleships and dreadnoughts, the XO is informally nicknamed “Gunnery Commander” (GUNCOM).

Skywatch line vessels maintain a post for the ranking enlisted officer, who must hold the rank of Chief Petty Officer or higher, regardless of ship class. This officer is addressed as “Chief of the Boat” (COB) and is the ranking enlisted officer aboard the vessel. Skywatch chiefs are considered senior officers for purposes of command and precedence. On destroyer and frigate-class vessels, they often serve as engineers and section chiefs as well.

Capital ships are required by law to appoint an enlisted crew member with the rank of Senior or Master Chief Petty Officer to the post of “Chief of the Deck” (COD) aboard carriers or “Chief of the Battleship” (COB) aboard battleships. Capital ship chiefs may not hold active senior ratings for other commands aboard a capital ship. Because those vessels have officers posted to lead each command, chiefs serve as close advisors to the captain and advocates for the ship’s enlisted personnel instead.

Argent’s star wing is generally under the command of a senior lieutenant or higher with the title Commander Star Wing (SCOM), assisted by a Deputy Commander Star Wing (DSCOM). They must both be flight officers and squadron leaders responsible for strike fighter, gunship, bomber, corvette and spacelift operations.

Argent’s Marine Ground Forces Commander (MCOM) usually holds the rank of major or higher and is responsible for her mechanized infantry, armor, orbital combat engineering and electronic warfare companies. The ranking marine officer is assisted by an enlisted Master-At-Arms (ARMSCOM) with the rank of tech sergeant or higher who is generally in charge of security aboard the battleship.

The battleship signals section is supervised by a Chief Signals Officer (SATCOM) with the rank of senior lieutenant or higher. A signals officer is responsible for the operation of all communications, electronic warfare, subspace warfare, alert, tactical, scanner, sensor, sight-sound synthesis, navigational and cryptographic systems. If a vessel has an intelligence section, their officers and crew members will most often coordinate their operations with the signals section.

Argent’s weapons section is supervised by a Chief Weapons Officer (WEPCOM) with the rank of senior lieutenant or higher. The weapons officer or “WEPS” is responsible for the operation of the main battery, point-defense, battle computer, missile and kinetics systems aboard the vessel. Aboard smaller vessels, weapons are often manned in series, with crews transferring from energy to missile systems between salvoes. Cruiser-class and heavier vessels are always manned with sufficient numbers to operate both types of weapons at the same time.

The commanding officer of the battleship Argent is Captain Jason Hunter, former flight leader of Yellowjacket Nine, also known as the infamous Bandit Jacks. He is a winner of the Skyshield Legion and the youngest confirmed ace strike fighter pilot in Skywatch history, which earned him the nickname “Ace.”

Commander Annora Doverly, M.D. is the former executive officer aboard Argent. She was assigned as the battleship’s Chief Medical Officer prior to the Monarch Squadron engagement over Bayone Three. Doctor Doverly was Captain Hunter’s wing during her time with the Bandit Jacks, and is also the only officer to have completed the Skywatch’s brutal Search and Rescue (SAR) training. Her callsign is “Hearts.”

Lieutenant Commander Yili Curtiss is Argent’s Chief Engineer. As a certified Orbital Combat Engineer, Yili is in charge of Argent’s Copernicus wing and demolitions teams, which coordinate with the marine OCE mech squadron in combat. Her callsign is “Spades.”

Acting Lieutenant Commander Zony Tixia is Argent’s Chief Signals Officer. She is arguably the best combat pilot among the Bandit Jacks, having earned nicknames like “Red Duchess” “Diamond Jack” and “Rabbit with a Gun” during her time as one of the most feared strike fighter pilots in space. Zony’s callsign is “Diamonds.”

DSS Argent is home to numerous “embarked” units, each with its own command structure and mission aboard the battleship. Among her embarked units are: