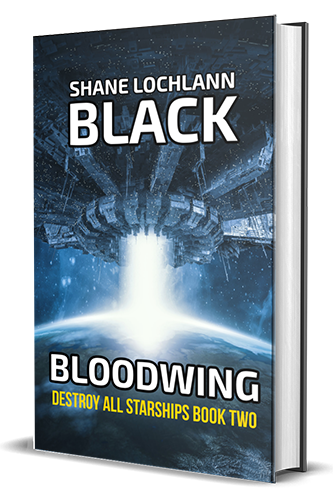 Alert klaxons screamed in scarlet-tinged corridors. Crew members with official duties ran this way and that, but there was nowhere to hide. The Manassas Conveyance Station orbited a fairly stationary asteroid near the Gitairn Frontier designated as Lunar Six One. The closest Skywatch facility was in-system more than two billion miles away.

“Inform those ships this is a civilian facility!”

“They’re jamming all the frequencies, administrator, I–!”

Jarlen Colvert stood before the utilitarian SRS display in MCD ComSat and stared wordlessly at the impossibly dense mass of inbound contacts. None of them registered cleanly. All his relatively simple scanner bank could do was make its best guess as to what it was seeing. It was designed to perform rudimentary spacelane traffic control for freighters and supply ships. It was by no means military-grade equipment. The result was a red cloud of tracking data that seeped forward, reaching for the tiny orbital facility with menacing fingers. The automated systems dutifully switched to the perimeter visual pickups when the inbounds broke 100,000 miles.

An icy certainty filled the communications center. Even the technician seated at the transmission console rose and slipped the headphones off her ears at the sight filling the screen. They were approaching at impossible speeds. Hundreds of fighters with at least a dozen cruiser-class vessels behind them.

“What do we do?! What do we DO?!” Jarlen could hear the young woman’s ragged screaming voice, but his own breathing was paralyzed. The cold inevitability of the sight before him was more than his merely human mind could process.

The screen went white. A violent implosion filled the facility with superheated disruptor reactions. There was a brief instant of shrieking and boiling flesh. The central section of the conveyance station tumbled out of orbit, trailing hard radiation, atmosphere and bodies.

At least three squadrons of Sarn Bloodwing fighters overflew the destruction, veering in several directions as new targets presented themselves. Two minutes later the largest remaining intact section came spiraling out of space and impacted the Lunar Sixty One asteroid surface at a relative velocity of 18,000 miles per hour. The resulting explosion barely registered against the apocalypse in the sky. Pieces of the station re-achieved escape velocity and scattered into space. Others skipped and bounced for miles.

As far as the rest of the sector was concerned, the brutal surprise attack took place without a sound. Humanity’s enemies had planned far in advance. The Imperial battle formation fielded no fewer than two cruisers equipped specifically for electronic warfare. With the power levels behind the counter-transmission waves being directed at the Alliance facility, there was no way to broadcast anything beyond a range of a few miles. Even the disaster buoys launched from the station were torn out of space the moment they broke free of their launch boosters.

Fighters set upon cargo shuttles like a starving pack of wild dogs. Anti-ship missiles impacted the lumbering boxy spacecraft, setting off violent explosions that filled space with strobing afterimages. Wave after wave of disruptor fire tore through station modules like tracer fire through layers of paper napkins. The local comnet was jammed with overlapping barked orders, screams and crackling static. Finally the main antenna vanished as four simultaneous concussion explosions engulfed it. The comm traffic suddenly cut off, like a windpipe being closed for good.

The first scale in command of the task force grinned wickedly as his enormous fighter formations savaged the defenseless station. Secondaries popped off in drifting hull structures as missile impacts flashed and burned along the remaining sections of the orbital depot. A police pinnace ran for the far side of the two-thousand-mile-wide asteroid. The four fighters pursuing it didn’t have to fire a shot. The security pilot swerved too close to the asteroid’s surface. Gravimetric feedback began to overload his drive field. He tried to make a break for open space, but it was far too late for such a small ship. Lightning briefly arced between surface and ship until it vanished in a white flash.

The outpost’s ground facilities were better defended than the orbiting station. They had rudimentary radiation and magnetic shielding due to their more advanced power systems. They survived the first bombardment. They almost survived the second. White-hot lances of disruptor energy rained down across the surface like the wrath of Zeus. Chunks of superheated rock tumbled into space trailing white and blue plasma. A storm of static electric energy formed over the target as the Sarn weapons ionized everything in a radius of a thousand miles. Then a series of nuclear detonations pounded the outpost. Tectonic ruptures formed in all directions.

The other Imperial cruisers joined in. Over the course of some twenty minutes of unrelenting space to surface bombardment the ground emplacement was burned into a six-hundred-foot-deep magma-filled crater along with one hundred forty-seven civilian personnel, a frigate-class starship hull, two fusion reactors and a disaster buoy launcher.

There were eleven human witnesses to the horror that followed. A spherical shape loomed in space over the remains of the ground station. There was no strategic purpose for its presence. There was no enemy for it to engage. It was being utilized to send humanity a message. The Kraken world burner activated its primary weapon. It ignited space again and again. Fusion explosions shattered half-mile-deep slabs of solid iron under the asteroid’s surface, turning them into clouds of radioactive fire. Thirteen minutes later there was nothing left of Lunar Six One except a trail of wreckage and unremarkable ores.

As the raider formation set course for its next objective, the first scale ordered his ships to jettison thousands of tons of uranium and thorium waste over the attack site. A plasma burst from one of his ship’s weapons ignited the cloud of specially-prepared energetic particles, creating a field of radioactive fire. It was a navigational hazard that would take weeks to extinguish and decontaminate. What was left behind would be unrecognizable as the work of an intelligent species. It was the space equivalent of salting the Earth and contaminating the water supply with dead bodies and disease.

The last distress buoy was pulverized by a Sarn fighter seventy thousand miles from the burning cloud.

It would be more than a month before the true nature of what had happened to the Lunar Six One facility was determined.